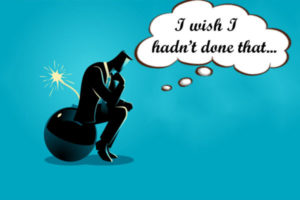 As leaders we need to practice what we preach.

Move over Frank Sinatra. My turn to eat humble pie.

In the thick of my career, I tried like so many other leaders to extol the importance of establishing a healthy culture at work.  I talked about values, vision and mission over and over. I spent a lot of time banging the drum about having work-life balance.  I encouraged my team to take all of their vacation time. I expressed how important it was for them to leave their work at the office when they went home, to spend quality time with their families and truly enjoy their weekends.  It was all good stuff. I wouldn’t call it rhetoric. I really meant it. But, I blew it at one point and learned a valuable lesson.

For better or worse it was a habit of mine to go into the office on most Saturdays – and even the occasional Sunday.  I personally needed that alone-time to catch up on the prior week’s work. Often, the day consisted of about four hours of plowing through email, reviewing documents, sorting through notes from that week’s meetings, reading key documents, and setting in motion some key follow up items for the sake of progress.  It was critically important catch-up time for me, and I always drove back home afterward feeling on top of things, and relieved that I could come in the following Monday ready to roll.  Plus, I could wear my Santana T-shirt and crank up the music in my office!

Well, as you can imagine, when I was attending to all this stuff, part of the flow was to send an email or two.  In fact, how about 50 or 60!  The emails were related to the work I was plowing through.  I had comments and questions about activity that occurred during the week and also saw the opportunity to kick-start some action on initiatives that surfaced.  Most of these emails went to my direct reports. That’s right – the same ones that I encouraged to take the weekends off, to spend quality times with their families, and to seek a good work-life balance.  Of course, being bombarded with six, eight, ten emails apiece from the boss didn’t align with the messaging that same boss was giving all the time about faith, family, job, work-life balance, and all of that. In short, I was saying one thing and doing another.  I was breaking my own rules so to speak. I wasn’t practicing what I was preaching. Yeah, I was meeting the definition of a hypocrite.

Enter my VP of Human Resources. What a class professional she was. She came into my office one day and said she needed to talk to me. I told her I’d be happy to talk and suggested we could schedule some time to do it. She closed the door and said: “No, this can’t wait”.  I liked that assertiveness. Anyway, she went on to tell me I was ‘pissing people off’ by sending them all these emails over the weekend. She said they felt tension when they received these emails from me and it often put a damper on their weekends.  She pointed out that when it came to establishing a healthy culture at work, in this one area my actions were inconsistent with my words.  She said it was hurting my credibility.  Man, I love that kind of direct report. She did her job, and her message was spot on.

I told her that I wasn’t expecting anyone to reply to these emails over the weekend – or to even read the emails. She said: ‘Then you need to tell them that”. She reminded me that when someone gets an email from the boss it’s usually implied that a response ‘sooner than later’ is in order.  I told her I really needed this weekend time in the office and that I couldn’t ignore the work I needed to do – or even the emails I needed to send.  But, I acknowledged the mistake I clearly made was not properly setting the expectations with my team that no one has to open the emails or do anything about them until Monday comes around. She accepted this train of thought and then encouraged me – and even directed me – to give this message to my team.  So, I did. No doubt tensions settled down and we got our culture back.

This episode was a true lesson learned for me.  As leaders, we need to walk the talk, practice what we preach, and be alert to our surroundings. We need that bell to go off in our head that tells us something ain’t right. And, we need to surround ourselves with people who will confront us for the good of the organization.  I love it when one of my direct reports corrects me when I goof up. I owe a debt of gratitude to that incredibly talented HR VP.